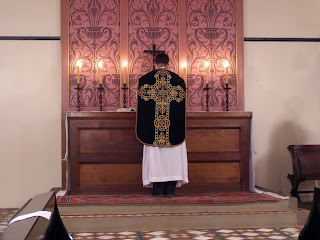 Given by the Vice-Principal, Fr Edward Dowler, during a Mass of Requiem for the founders of St Stephen's House, former Principals and the founders & Superiors of the Society of St John the Evangelist in whose original buildings the House now resides. The Mass was organized by a group of students on the eve of our commemoration of Bishop Edward King, principal founder of St Stephen's House.

When I was studying at , the Regius Professor of Divinity, David Ford gave a very interesting inaugural lecture in which he talked about academics who say, ‘I’m so busy teaching that I never have time to get on with my own work’. It is, he argued, actually an absurd statement to make. Although it may an appear to academic as he or she sits in a library reading a book that they’re just getting on with their own work, in fact there is no such thing as one’s own work because all academic work is a community endeavour. The book that that he or she is reading, the library in which they sit, the university post that enables them to be there in the first place: all of these are dependent upon an academic community. There is literally no such thing as one’s own work, so much does our ability to do any academic work depend upon the achievements of others. Thus, Professor Ford argued, academics should not see teaching as an annoying distraction from ‘their own work’, but as an integral part of a joint community endeavour.

A similar individualism can pervade the Church at times when we talk about my vocation, my ministry, even dare one say, my faith journey. Officially I hope that we are all agreed that the primary vocation is that of the entire Church to be God’s priestly people and it is only within that priesthood that I can talk about being a priest at all. But all too often individualistic language creeps into our mindset, sometimes to the potentially very damaging extent of suggesting that my vocation is basically a private arrangement between myself and God in which others are not really involved. And again, as with academics, we should note that this is not only theologically wrong, but also just plain inaccurate. Anything that I in my ministry as a priest ever have achieved or ever could achieve is a result of the work of countless others within the royal priesthood of the Church who have brought both me and my brothers and sisters in Christ to where we are today.

Today and tomorrow as we commemorate and give thanks for our founders and benefactors here at St Stephen's House, I think this is an important thing for us to remember. Schooled as we are in highly individualistic ways of thinking, we can so easily forget that all our efforts, however great and heroic they may be are only ones that we can make because we stand on the shoulders of others. We give thanks to God for them, and commend them to his merciful keeping.
Posted by St Stephen's House at Saturday, March 07, 2009

St Stephen's House is an Anglican theological foundation in the University of Oxford, offering formation, education and training for a variety of qualifications and ministries.


O Jesus, living in Mary,
come and live in thy servants,
in the spirit of thy holiness,
in the fullness of thy might,
in the truth of thy virtues,
in the perfection of thy ways,
in the communion of thy mysteries.
Subdue every hostile power
in thy spirit,
for the glory of the Father.
Amen.

St Stephen's House was founded in 1876 by members of the Tractarian movement and has stood, ever since, in the catholic tradition of the Church of England.

The House’s principal founder was Edward King, then Regius Professor of Pastoral Theology in the University of , and later Bishop of Lincoln. King has been acclaimed as one of the outstandingly holy men of his age, and exercised considerable influence on the early life of the House. Associated with King were William Bright, Regius Professor of Ecclesiastical History and a great scholar; Edward Talbot, Warden of Keble College and subsequently Bishop of Winchester; Edwin Palmer, Professor of Latin and Archdeacon of Oxford; Edward Woolcoombe, a Fellow of Balliol with a great interest in and support for the missionary movement; and John Wordsworth, Chaplain of Brasenose College. Finally among the founding band was Henry Scott Holland, then senior fellow at and one of the leading figures in the development of the Christian social teaching of the time.

For the House’s first years, it was situated near the centre of , where the New Bodleian Library now stands. From 1919, the House had a site in , near to the University Parks. In 1980 it moved to the current site, formerly the mother-house of the Society of St John the Evangelist (also known as the Cowley Fathers), founded by Richard Meux Benson.